What is the proposal?

The current proposal presented to the Council is to construct an artificial pitch and associated infrastructure in the south-west corner of Mt Claremont Oval (see artist image below).

The club over the past two years has developed a concept at its own cost that would fit on the site and still retain a grassed rectangular pitch for use by other sports including Mt Claremont Primary School athletics, and a grassed area for casual use.

The main public access would be located at Montgomery Avenue with only service access from Alfred Road. Some of the existing infrastructure would need to be re-located, such as the cricket nets and western-end flood lights. 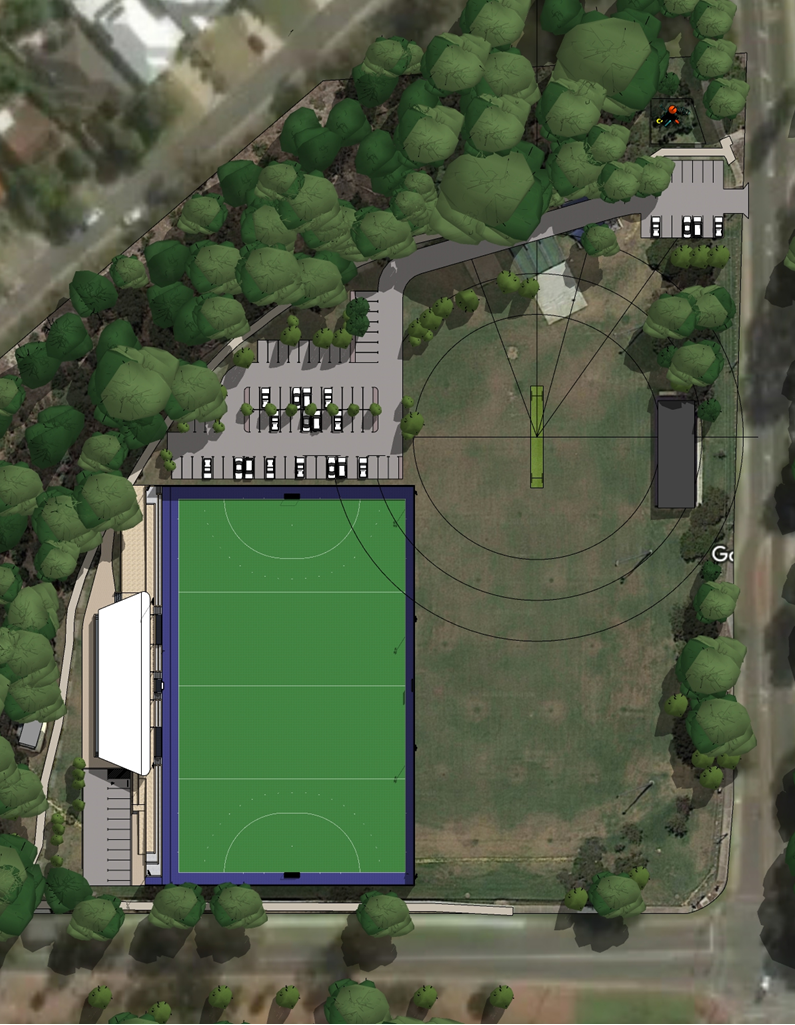 What is the Westside Wolves Hockey Club?

Western Australia is a significant participant and contributor to the sport of hockey in Australia and internationally. The western suburbs of metropolitan Perth support four established hockey clubs. These clubs engage in regular fixtures, the development of hockey in schools and junior Minkey hockey programs.

Westside Wolves Hockey Club is one of four clubs, originating from an earlier established club. It has been a long-term participant in premier competition divisions for both women and men.

The club fields senior teams from first grade to veterans and has an extensive junior program at College Park. Running for nearly 30 years, it is thought to be the largest in Australia with nearly 20 local schools participating. The membership of nearly 1,700 is currently made up of:

The club regularly provides players for state and national teams. There are currently three men and two women in the national squads and nearly 40 players representing Western Australia over the various age groups.
Please visit the Westside Wolves Hockey Club website to find out more.
Top Of The Page

Why Mt Claremont Oval as the preferred facility?

There are currently 12 artificial pitches in metropolitan Perth and only three of these are located within the western suburbs. The club, previously, developed a proposal to locate a similar facility at Allen Park, which was unsuccessful.

Other sites have been investigated but have been discounted due to size, location and the costs of construction - and on some sites, the cost of rehabilitation.

In the absence of other suitable sites and the requirements for a hockey facility, Mt Claremont Oval is the most appropriate option.

Currently, there is a recognised shortage of artificial hockey pitches in Western Australia and the Perth metropolitan area. An additional synthetic pitch at this location will relieve pressure on the current Shenton Park facility for the benefit of other local hockey clubs.

How much of the reserve (including oval) precinct will the proposal consume?

Mt Claremont reserve is a Crown Reserve allocated for the purposes of recreation. The reserve has an area of 4.8 hectares including 2.21 ha of bushland.

What is the current sporting usage?

The reserve is not over committed with sports and is used mainly for junior sporting activities along with some use for cricket or soccer and sports with low rental hours. The oval is currently utilised by:

Have the City and Westside Wolves spoken with other clubs using Mt Claremont Oval?

If the project is supported by the community, the next stage will include in-depth consultation with all Clubs to determine if they can be accommodated at Mt Claremont Oval or may require alternative locations within the City.
Top Of The Page

Should the project progress, what will be the cost to the City?

Should the project progress, all costs associated with the artificial pitch and pavilion would be met by the Westside Wolves (via fundraising, possible government assistance and sponsorship funding).

Any decision by Council to undertake consultation or subsequently allocate Mt Claremont Oval as suitable for a synthetic hockey pitch does not pre-commit Council to future funding obligations for this project.

The decision to assist with funding is a separate decision and will be considered on its merits, Council's financial capacity and any other relevant considerations.